Menu
GET IN TOUCH

One Locksmith Door Opening (Manchester) I will never forget!

One locksmith door opening job always sticks in my mind, even though it was all the way back in 2011.

As you can see in the cracking photo at the top of our ‘About Us’ page, the central Manchester skyline is significantly different to today, with Beetham Tower being the first and only ‘skyscraper’ to be built in the city at this time.

The property management company required a door opening in Manchester. The door was quite standard and no problem at all… but its location wasn’t.

A door to be unlocked – but where?

As if being out on a rooftop plant room wasn’t enough, the only access that had been designed into the building (those pesky architects) was to go up a fixed wall ladder and then shimmy around the edge of the roof overhang on a ledge (it was around 5ft wide, but at 8 stories up it felt like a tightrope!).

The part that makes me laugh to this day, is the picture in my mind of the building manager turning around to me as he stepped on the bottom rung of the ladder and asking, “do you need a harness?” He managed to say this with a straight face, while wearing a harness himself!!!

You can imagine my response – “if you need one then so do I, matey!”. For a moment it looked like he was going to take off his own to give to me, until he thought better of it and we went back down to find me a hareness. Not that wearing it helped my jelly legs much!

Anyway, it turned out opening the door to this little rooftop plant room wasn’t really the issue, as the the door being allowed to flap around in the wind, banging furiously and damaging the latch. Fortunately we had stock of the lock, which meant the job was completed a single visit and we didn’t have to scale the roof again later on! 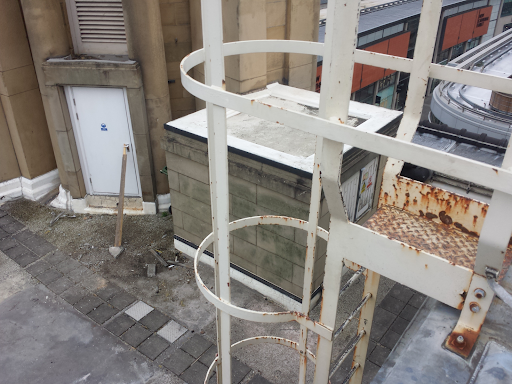 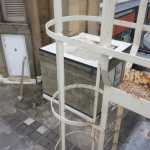 One Locksmith Door Opening (Manchester) I will never forget!

Genuine Local Locksmiths Near You